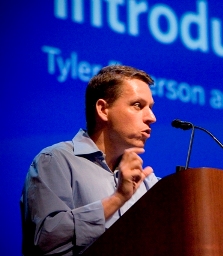 Billionaire Peter Thiel recently announced at the TechCrunch Disrupt conference in San Francisco that he will award 20 people less than 20 years old cash grants of $100,000 to drop out of school.

The Thiel Foundation was created to help innovate the next generation of tech visionaires. He believes there is more value for the entrepreneur to launch a tech or scientific idea immediately that to wait the full four years of college or eight years of grad school. Is Thiel doing the irresponsible thing by telling kids to stop going to college or is his forward thinking the next big thing?

It’s often been debated if kids should be sent off to college to help them become successful in their life. With the changes in economy, I am beginning to think the idea of sending them off to college is becoming old fashion.

I know the youth of today feels the weight on their shoulders. My 16-year-old son is out looking for a minimum wage job at the local theater and fast food joint but is told, “we’re not hiring right now.” I cannot remember a time it was difficult as a teen to obtain a job. It is concerning that my son and his friend’s constantly discuss what a challenging era they are growing up in (not just economical, but environmentally).

There is no doubt in one’s mind that getting a job is more difficult these days. The Bureau of Labor Statistics reports some states have a 14.4% unemployment rate (Aug 2010).

Some of the Hardest Hit States (11% and higher):


To help the unemployed cope, unemployment insurance is extended to 99 weeks for some hard hit areas.

And college doesn’t look so enticing when you see that these self-made billionaires dropped out of college to seek out their passions and succeed (Forbes 2003).

And here is the reason why Thiel and others alike believe entrepreneurs need to launch their technical and scientific innovations now:

“Because education seeks to impart past knowledge, when you are trying to create a technological breakthrough, you have to create new knowledge, and there is no way to teach that.”

They need to take their passion, drive, and self-taught knowledge to develop innovations. Bravo (I love that quote above, but it also explains why I can get so frustrated in the tech world – that’s why I love Google to find answers to my quandaries in a pool full of results).

College students are being over consumed with student loan debts in their 20s. Parents facing their own money battles from the economic crisis cannot foot their child’s tuition bill. While college tuitions continue to rise, government scholarships and grants are dwindling. So, our children are taking on a blind faith that taking out large student loans will make for a worthy investment when they graduate (it makes me cringe when I hear of people carrying $100,000 worth of student loan debt).

We are making our children responsible young adults by putting them in debt? To struggle for survival? This is what we want for our kids? I don’t think so. And neither does Thiel.

There is a new movement taking place. A scarcity of jobs cause people to hustle ‘side jobs’ either because of the need to survive or to stashing away money to make ourselves financially responsible. Another reason is because we found we need to believe in ourselves – we are designing our own lifestyles – when we want to work, where we want to work. And the concept is working.

Technology is definitely expanding and designing our future, too. From computers, cell phones, to genomic sequencing machines – technology is a force that will drive the economy. Thiel’s program makes sense.

The Thiel foundation is awarding grants of $100,000 each to twenty participants for a two year program that will make them ultra-entrepreneurs. That is offering them a $50,000 salary or start-up money per year for these students to pursue their passion. This program will allow students to work on their ambitions before taking on the possibility of mass student loan debt.

ABOUT THE THIEL FOUNDATION
The Thiel Foundation defends and promotes freedom in all its dimensions: political, personal, and economic. The Thiel Foundation supports innovative scientific research and new technologies that empower people to improve their lives, champions organizations and individuals who expose human rights abuses and authoritarianism in all its guises, and encourages the exploration of new ideas and new spaces where people can be less reliant on government and where freedom can flourish. For more information, see ThielFoundation.org.