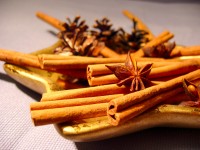 As I was thinking about the holidays and what I love so much about them, I remembered the holiday smells that use to waft through my friend’s house. Only the fragrant smells were not from good ole’ home cooking, but from a few common ingredients found in the pantry and around the garden.

A little Knott’s boysenberry syrup, a couple of cinnamon sticks, little white flowers from an orange tree, a few cloves, and a bit of water stirred in a pot turned my friend’s house into a holiday abode.

Homemade Simmering Potpourri is a great, frugal way to make the house smell delicious. For some more ideas, try these great recipes.

Directions: To make homemade simmering potpourri fill a small saucepan with the ingredients and simmer over low on the stove or use an electric potpourri simmering pot

. Make sure to keep an eye on the water levels and refill as necessary.

Simple and great smelling. I like to mix the dry ingredients up in little Ziploc’s to have them ready to add to water during the holiday season.

1 lemon
1 orange
3-3 inch cinnamon sticks
6 bay leaves
½ cup whole cloves
Cut lemon and orange into slices or place in pot or slow cooker or saucepan. Cover with water and then top with a few bay leaves, whole cloves and cinnamon sticks. Cook on low heat. You can refrigerate and reuse any leftovers.