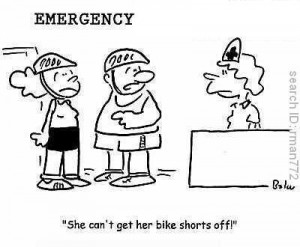 I don’t know how I feel about this subject. My son’s father was riding his bicycle home from work. A truck hesitated to the oncoming traffic, saw my ex, but proceeded to go forward. Thus, hitting him and causing him to flip over the hood of the guy’s truck, totalling the bicycle and causing damage to the ligaments in his knee. He was rather fortunate, the damage could have been worse. He suffered a large scrape on one shin and is going to have surgery on the knee. He will recover with some time, surgery and R & R.

Why it’s important to be financially prepared. Unfortunately, my son’s father was freaked out that they were going to charge him large sums of money if he took the ambulance (he has full health insurance). So, he had his mom take him to the hospital (I already yelled at him about that one and told him take the darn ambulance!). Least he is covered with full insurance offered by his work.

What he was not covered in: having money to hold him over until disability came through. This is where the Emergency Fund comes in handy.

The doctor’s gave him 3 months off work for surgery and healing. But, the doctor signed the disability papers late. Thus causing my ex not to get his disability checks at the necessary convienence. So, he is borrowing money from his mom and the bills are piling up. Needless to say, he owes people/bill companies quite a bit of money.

Why I am thankful that I have a financial plan. If I didn’t start this blog, gain wonderful blogging friends, and start planning my financial future I wouldn’t be able to do this: stock my ex’s fridge with food. Yes, it is weird to me to have my now DH and I buy my him food. And I am not saying this to gain praise, but it was really nice to be able to help someone in need.

Now, I just want to show him how to save for an emergency fund! But, I don’t think he’ll listen.

Moral of the story: Build and keep that emergency fund. You’ll never know when you need it!

Are you prepared for a potential financial hardship? Do you need to build an emergency fund? Are you looking to get your finances in shape? Please Read The Total Money Makeover

by Dave Ramsey. It really does guide people to become financially healthy. 🙂