Yes, it’s easy, but adopting it means being an iconoclast by default.

I’m talking about The Activity (actually, The Lack Of An Activity) That Dare Not Speak Its Name. One so extraordinary, so unusual, that everyone under its spell is treated as some sort of human aberration in need of reassurance and approval. And even then, people will still be certain that you must be either a medical curiosity, a desperately penitent deviant with an unfathomable past, a sheltered religious zealot, or at any rate, a less-than-full member of society. Because no one with this horrible affliction could possibly be enjoying all life has to offer. 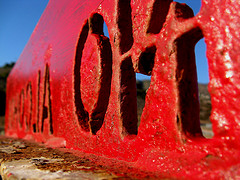 Never even crossed your mind before, did it?

Look, this is not a moral issue. I am not your finger-wagging aunt. It doesn’t matter to me if you shoot black tar heroin into both eyeballs simultaneously. I don’t care if Ron Wood throws his hands up in defeat after a night on the town with you because he can’t keep up. Or if Lindsay Lohan says, â€œI’m, like, having fun with you and all, but still, here’s the name of my addiction counselor. Call him. He’s really good.â€

But if you are going to inject that smack, at least don’t throw away money on it.

A rum & Coke at the Foundation Room in Las Vegas costs $12, but the view of the Strip is complimentary. However, the same drink is essentially the same price 40 floors downstairs at the (indoor) House of Blues.

That’s one ounce of rum, maybe an ounce-and-a-half if you and the bartender share sufficient sexual chemistry. Premium rum costs a bar maybe $14 for a 59-ounce bottle, so you’re buying 24¢ worth of rum, a penny or two of cola syrup, and ice and water, whose prices are measured in trillionths of cents.

Which means you’re paying about 4500% markup for the drink itself. And of course, you’d better be leaving a tip, you cheap bastard.

It doesn’t matter what your preferred intoxicating beverage is. The margin between what the distributor pays for beer and what you pay is in the same neighborhood. And let’s not forget the wonderful 21st century indulgence of â€œbottle serviceâ€, in which an upscale venue charges you even more for the privilege of not having to go to the bar or flag down a waitress to order drinks. (Which reduces the workload on their bartenders and waitresses, freeing up time for them to serve other patrons absurdly marked-up drinks.)

Nothing comes with a higher markup than alcohol does, except maybe Cuban exit visas. And why not? The people who sell alcohol have the perfect clientele â€“ motivated, repeat buyers who don’t accept substitutes.

Look at it this way. Among doing other things, I sell books (available now at Amazon and BN.com!). But imagine if every person who bought my book either:

-just wanted to be left alone with it, gazing into the book while contemplating their sins;

-bought one every week as far back as he could remember, and would continue to because that’s just the way he’s always done it and always will do it;

-was legally too young to buy it, and risked expulsion or a citation or parental punishment because my book was either such a great read or a necessary stepping stone en route to full adulthood, or;

-was commemorating something, and wanted to prove to the guest of honor that money was no object.

If you’re drinking, you’re probably either depressed, a creature of habit, addicted, trying to be cool, or celebratory. Okay, fine, you aren’t. Whatever you feel comfortable believing.

Now let’s assume that I sold my book at the same markup bars do. That means you’d be paying $268 for a regular glossy trade publication. Yet I sell the Kindle version for 10 stinking bucks, trusting the electrons will arrange themselves in a way you find engaging.

Just try it, once. Purely as an economic exercise, go out with your regular co-conspirators and substitute club soda for beer. You’ll be embarrassed to do this, peer pressure being far stronger among adults than it is among kids. So tell everyone you’re having surgery the next morning if that’ll make you feel better. Surgery on your instep. (Pick an innocuous and hard-to-reach body part. No one will ask you to take off your shoes.)

If you usually kick back 5 drinks a night, every couple of weeks, you’ll save well over $1000 over the course of a year. How many days’ worth of take-home pay is that for you?

The uncompromised brain cells will just be a bonus, as will the feeling of nonchalance at the police roadblock.

Greg McFarlane is an advertising copywriter who lives in Las Vegas and Lahaina â€“ testament to the power of entrepreneurship. He recently wrote Control Your Cash: Making Money Make Sense, a financial primer for people in their 20s and 30s who know nothing about money. Buy the book here (physical) or here (Kindle) and reach Greg at [email protected].

20 thoughts on “The Easiest, Most Painless Way Imaginable To Save Money”