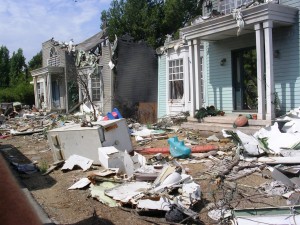 I couldn’t decide which pictures to use from my Universal Studios trip for this post. But, in the end… here it is. Can anyone name what movie this set is from? (Hover over pic for hint).

JPKittie asked me how my Hawaii fund was coming along. Today I made it a catastrophe. Let me explain.

Hawaii fund is the same as the Emergency Fund *BUZZZZZZ* WRONG thing to do!

1st mistake. They should be two separate funds, but they are not. It started out as two, then combined into one… something(s) came up and now it’s none (it rhymed. had to say it)… I mean it’s at $575.

July:
Really bad planning for camping trip: – $200
The date just kind of snuck up on us, plans went wacked, we played it by ear and we payed for wacked up, non planned camping trip.

August:
Bought ex groceries: -$100
I would do it for anyone that needed a meal. We all run into a hard time in our life. I would hope that the helping hand might return if I were in the same situation. The mistake here, EF & HI fund are the same account.

Universal Studios Trip: -$217
Won the tickets. Expired. 🙁
It was nice that a boy gave us a $15 off per ticket. Really made me smile despite the turmoil of the situation.

Yup, screwed up this week’s personal challenge! ROYALLY!!!! Yes, I overdrafted *gasp* with that simutaneous effect where it rolls over. Four charges and four overdraft charges that should be charged on the account tonight. Plus we still need gas money for the rest of the week. Where did we mess up? Maybe the effects of living on $250 a week were starting to feel the strain. Whatever it was…. we messed up ROYALLY.

I still sent off the $202 payment to my Visa card, but that money came from the Hawaii/Emergency Fund. No Win this week. 🙁
And I knew about my son’s dental fees, but I think I was secretly in denial.
I knew my son had school fees. Again in denial or I was hoping to have the funds somehow saved for it by this time.
I did not know about my son’s $250 dollar public school bus pass until today. So, I only paid a quarter fee at this time. 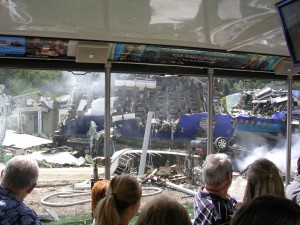 With the closing of today I’ve finalized a “World” (word = another hint) of mess with my Hawaii/Emergency account! I now know what goal I need to shoot for in this Earn More Challenge. LOL. >$1,000 is alot of money to try and make in one month. But, I love a challenge and I am hoping that it will jump start some marvelous entrepreneurial plans. Oh, a girl could wish.

Don’t have pity on me. I messed up. And now I just need to get back up, dust myself off and keep on working at my goal. I know that my family is working a high-risk challenge with a potential for a more volatile activity. But it also has the great potential to have a fantastic outcome (equal to playing high risk stocks?). Murphy meet, Murphy part, Murphy Meet Again! LOL.